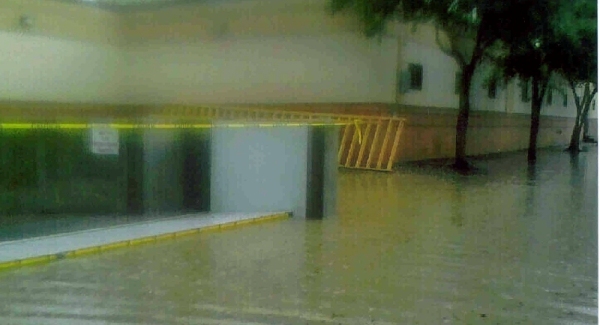 Background
HCA Affiliated Bayshore Medical Center is a 345 bed community-based hospital in Pasadena, TX and serves patients east of Houston. The hospital is located in an area susceptible to flash flooding and storm surge from nearby Clear Lake & the Gulf of Mexico.  As a primary care facility for the surrounding community, the hospital must remain operational.

Solution
Bayshore Medical determined that their service entrance was vulnerable to street flooding that would then run down the drive and flood bottom floor equipment.  They decided to floodproof their facility and chose a FloodBreak® Automatic Floodgate as the flood barrier to protect the entrance.  They were well aware of the active closure failures that had failed in the nearby Texas Medical Center and wanted to be protected 24/7 without the need for human intervention or power. The FloodBreak Automatic Floodgate was installed at the top of the service entrance where it would provide permanent flood protection but remain hidden to allow employees and vehicles unimpeded access unless the area flooded.

Results
The FloodBreak Automatic Floodgate has protected the hospital from flooding on at least two occasions.  When Tropical Storm Erin hit south Texas in August 2007 it caused several bayous in the Houston area to reach or exceed flood levels even though landfall was miles away.  The FloodBreak barrier was lifted by the rising floodwater that had overwhelmed the sewer system and protected the facility from flooding.  The following year when Hurricane Ike hit Galveston, due south of Pasadena, the storm surge caused street flooding but again the FloodBreak Automatic Floodgate protected the facility from flood damage.