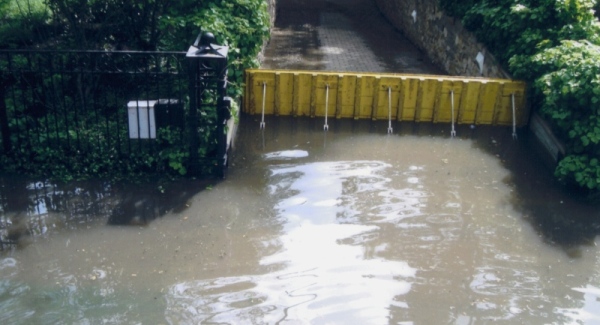 Background
A private home in an exclusive residential suburb of Chicago, Illinois was susceptible to street flooding. The lot is situated at a low point on the street, with higher elevations in both directions.  When heavy rainfall occurred, local street flooding overtopped the street level entrance and flowed down the driveway and flooded the basement level of the structure. Flood damage was extensive; estimated at $100,000.

Solution
The FloodBreak® passive flood barrier was an easy retrofit into the driveway of the home.  In order to minimize the visual impact of the flood control system, the barrier was painted in a pattern that matched the driveway paving stones.  The entire process, from order to completed installation, was accomplished in less than eight weeks.

Results
Within a few months of the installation, a flood event occurred and the home was protected.  Several further events have occurred resulting in savings of at least $100,000 per occurrence.  Additionally, the home which had been deemed unsalable due to the frequent flooding, saw its market value significantly increase when it was sold.

Customer Quote
WOW!!! Once again you saved our home! This house was built ten years ago and lost 70 % of its value after the flood.  I bought it with the contingence that your floodgate would be installed and WORK!  You have taken the omen off this house known as the “flood house” and brought it back into a saleable home. I no longer have to lose sleep when I hear about another 100-year rain (they seem to come about every 3 years now). You and your staff should feel great about what you have accomplished. My family (and insurance company) and I would like to thank you and your team for inventing such a great product. THANK YOU THANK YOU THANK YOU! – Patrick O., Owner